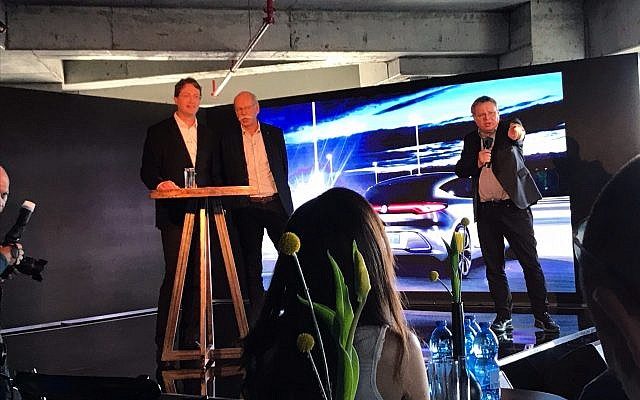 There are 539 multinational corporations from 35 countries operating in Israel’s tech ecosystem, with these firms seeing the startup-heavy country as a go-to place for new ideas and entrepreneurial culture, according to a report by Start-Up Nation Central (SNC) and PwC Israel.

The report tracks the evolution of these companies’ activities in the so-called Startup Nation, according to a statement released by SNC.

According to the data, 55 percent of the MNCs innovating in Israel are headquartered in the US, 27% in Europe, and 15% in the Asia-Pacific, including China.

These firms are in the fields of technology (18%), pharmaceuticals and life-sciences (8%), financial services (13%), industrial products (10%), automotive and transportation technologies (11%), entertainment, communications and media (11%), food and agriculture 8%, and retail and consumer (10%), among others.

This illustrative photo shows the Facebook logo displayed on a tablet in Paris on February 17, 2019. (Lionel Bonaventure/AFP)

There are more than 6,600 startups in Israel’s small and connected economy, 14 times the concentration of startups per capita in Europe. And while Israel has just 0.1% of the world’s population, the nation attracts 19% of global investment in cybersecurity, ranks number one globally in R&D expenditures per GDP, and attracts the highest rate of venture capital funding per capita in the world — some $674 per capita in 2018, according to the report.

Over time, MNCs have diversified their operations in Israel. Firms that started operations via the acquisition of a startup or by setting up R&D operations locally have started adding open innovation models as well, collaborating with local innovators, mainly startups, through incubators, or with academic institutions, the report said. Open innovation refers to the process in which firms collaborate with idea- and technology-rich third parties — often startups — as opposed to developing all of their technologies in house.

“We see a shift in the operations of these MNCs in Israel toward open innovation platforms,” said Karin Gattegno, VP of Strategic Partnerships at SNC, in a phone interview. This collaboration opens them up to other views that they wouldn’t be exposed to by just doing in-house R&D, she said. With open innovation, they get access to a variety of startups “that have a lot to offer.”

Some 59% of MNCs tracked in the report operate via R&D facilities. These are companies with significant Israel-based research and development operations, often grown through acquisitions of local companies, that benefit from the talent pool of software engineers and data scientists to lead new product ideation and development.

Some 25% of the MNCs operate in Israel via a partnership-led model, meaning the firm works together with startups or academic institutions or other third-party entities through commercial agreements and or jointly developing a product; others — some 16% — use the investment-led model, when global corporates invest in local startups for strategic purposes or financial returns.

The report notes a shift, starting in 2014, from a traditionally R&D-led focus to more investment-led and partnership-led open innovation operating models.

Since 2014, there has been a “notable increase in the number of open innovation teams being activated by MNCs in Israel,” the report said, and the “blend of industries has also increased since 2014, with retail, healthcare and financial services companies starting to explore collaborative programs with third parties.”

When asked what the key drivers were for setting up their innovation activities in Israel, some 77% of MNCs said it was to enhance their core capabilities with open innovation, while others, 44%, said it was to access local talent and to gain “disruptive business models.” Others said the aim was to acquire local R&D assets (37%), gain a return on investment, (32%) and because of the innovation culture in Israel (28%).

Some 89% of the respondents said their activities in Israel have indeed enabled them to achieve incremental innovation on existing products and services.

The MNC executives interviewed by the authors of the report cite four key benefits of innovating in Israel: the nation’s technology capabilities — the distinctive quality of the intellectual property and technical maturity of Israeli startups; the local talent pool, which is seen as a “significant asset”; the openness and accessibility of the players in the ecosystem and the small and highly concentrated market, with its culture of collaboration, even among competitors, which is very distinctive; and the “challenge mindset” of Israelis — where local innovation teams impact the broader group by challenging prevailing ideas, bringing imaginative and more aggressive applications to the technologies and ways of doing things.

MNC’s have discovered that operating in Israel exposes them to the “Israeli mindset,” Gattegno said, with “entrepreneurs who work fast to resolve problems, provide out of the box solutions. This mindset also has an impact on the bigger company. Working with Israelis helps these firms bring the mindset of innovation and problem solving” to the organization as a whole.

The key challenges to innovating in Israel are bridging the corporate and startup way of working; smoothing the interface between the Israeli activities and other business units; overcoming cultural barriers; finding and retaining talent; aligning corporate and innovation strategy; and managing the distance between HQ and Israel, the report said.

MNCs’ confidence in their innovation performance in Israel is very high. Two-thirds of MNCs surveyed perceive themselves as ahead of competition in terms of innovation performance. Some 40% of the MNCs surveyed cited Israel as a “distinctive location” for their global activities, different from their other innovation locations. For some of them, it was because of the impact the innovation in Israel has had on their revenue — for example, 50% of Merck Group’s global healthcare revenue stems from Israeli innovation — whereas for others, the operations in Israel are distinctive because it was their first center outside their HQ location.

The research was conducted through in-depth interviews with MNC executives and innovation experts in Israel and globally between September and December 2018, the report said.