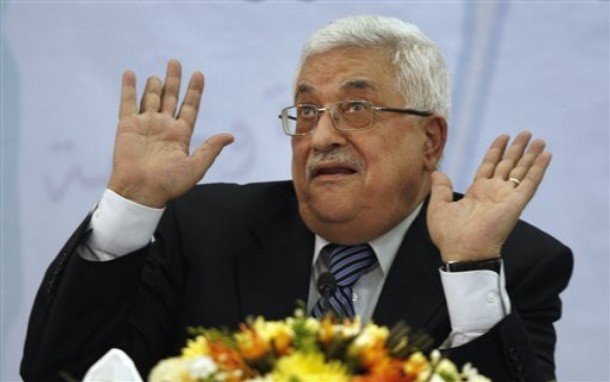 Palestinian Leaders Butcher the Truth. Why?

According to the Palestinian Authority’s version of reality, the tragedy of a recent terror attack in Israel was not that two innocent Jews were stabbed, but that the Palestinian terrorist who committed the attack was killed.

By Bassam Tawil, The Gatestone Institute

The wave of terrorist attacks against Israeli police officers and civilians began shortly after Palestinian Authority President Mahmoud Abbas said in 2015 that the Palestinians will not allow Jews “with their filthy feet to defile our Al-Aqsa Mosque,” and “We bless every drop of blood that has been spilled for Jerusalem, which is clean and pure blood, blood spilled for Allah…” (Image source: Palestinian Media Watch video screenshot)

The Palestinian Authority (PA) is up in arms because Israeli policemen killed a Palestinian who stabbed two Jews in the Old City of Jerusalem. The terrorist, 19-year-old Yusef Wajih, from the West Bank village of Abwain, near Ramallah, stabbed one of the men in the neck and head near the Old City’s Damascus Gate, leaving him in serious condition.

The second victim was a 16-year-old who was stabbed by the terrorist in the back a few hundred meters away from the scene of the first attack. The teenager sustained light to moderate injuries. Police officers shot and killed the terrorist, thus preventing him from harming more Jews.

Such stabbing attacks are not uncommon on the streets of Jerusalem. In the past few years, Palestinian terrorists have carried out several stabbing and shooting attacks against Israeli police officers and civilians, particularly ultra-Orthodox Jews who were on their way to or from prayer at the Western Wall.

The wave of terrorist attacks began shortly after Palestinian Authority President Mahmoud Abbas said in 2015 that the Palestinians will not allow Jews “with their filthy feet to defile our Al-Aqsa Mosque.” Abbas was referring to the Israeli authorities’ decision to resume Jewish visits to the Temple Mount. The visits were temporarily suspended for security reasons after the eruption of the Second Intifada in September 2000.

Abbas, who was speaking during a meeting with Arab residents of Jerusalem in his Ramallah office, added:

“We bless every drop of blood that has been spilled for Jerusalem, which is clean and pure blood, blood spilled for Allah, Allah willing. Every Martyr (Shahid) will reach paradise, and everyone wounded will be rewarded by Allah. The Al-Aqsa [Mosque] is ours, the Church of the Holy Sepulcher is ours, and they have no right to defile them with their filthy feet. We will not allow them, and we will do everything in our power to protect Jerusalem.”

Inciting Violence Against Jews Visiting the Temple Mount
Since Abbas’s statement, the Palestinian media has been waging a campaign of incitement against Jewish visits to the Temple Mount. Abbas’s official news agency, Wafa, regularly describes the peaceful visits by Jews as violent incidents by “settlers” and “extremists.” Almost every week, Wafa publishes a report under the headline: “Jewish settlers storm Al-Aqsa Mosque.”

Such reports are intended to send a message to the Palestinians that the Jews are launching some kind of a violent “incursion” into one of Islam’s holiest shrines.

The truth is that the Jews touring the Temple Mount have never entered any of the mosques at the site or were involved in any form of violent attack against Muslim worshipers.

Abbas and his Palestinian Authority, however, are careful not to be confused by the facts. The terrorist who stabbed the two Jews in the Old City of Jerusalem was undoubtedly influenced by the ongoing incitement by Palestinian leaders regarding the Jewish visits to the Temple Mount. It is this type of incitement that prompts Palestinians to grab a knife and set out to stab the first Jew they meet.

Yet, instead of condemning the terrorist for attacking Jews on the last Friday of the holy month of Ramadan — hours before hundreds of thousands of Muslim worshipers converged on the Al-Aqsa Mosque compound for prayer — the Palestinian Authority chose to denounce Israel for killing him.

Yusef Wajih, the terrorist, came to Jerusalem armed with a knife to kill Jews. That was his only goal. He could have taken advantage of Israel’s easing of restrictions during Ramadan — a move that saw hundreds of thousands of Muslims to enter Jerusalem every Friday to pray at the Al-Aqsa Mosque.

“The Palestinian Foreign Ministry condemns the crime of extra-judicial killing carried out by the occupation forces in Jerusalem,” Abbas’s ministry said in a statement shortly after Israeli policemen shot dead the terrorist. The ministry called on the International Criminal Court (ICC) to launch an investigation “into this crime and hold to account the perpetrators of such crimes.”

By calling the shooting of the terrorist an “extra-judicial killing,” the Palestinian Authority is seeking to create the impression that Israeli policemen drag innocent Palestinians to the street and publicly execute them for no reason. This is the type of blood libel that also propels Palestinians to carry out terrorist attacks against Israelis.

It is, therefore, precisely the Palestinian Authority leadership who continue to lie and incite their people against Israel and Jews, that ought to be put on trial by the International Criminal Court.

If the ICC ever looks into this incident, it should begin its inquiry by investigating the vicious incitement of Palestinian leaders, who use Jewish visits to a holy site in Jerusalem to butcher the truth, just as it whips up Palestinians such as Yusef Wajih to wake up in the morning and butcher the first Jew he meets. The blood of Wajih is on the hands of Palestinian leaders, and not the police officers who stopped a terrorist from stabbing yet more Jews.

Bassam Tawil is a Muslim Arab based on the Middle East.