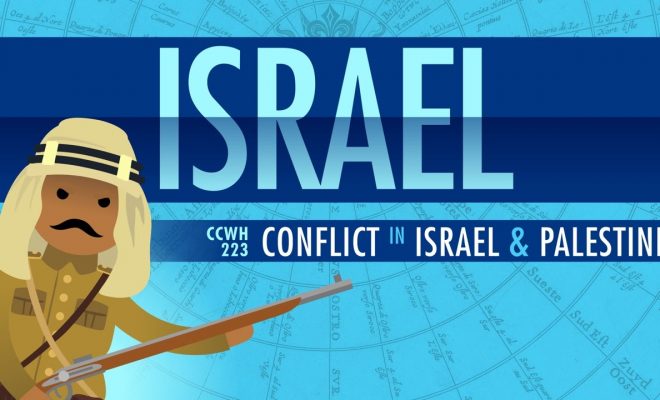 The truth about the middle east, Israel Palestinian conflict in 5 minutes, by the Prager University

Israel would like to exist and recognizes the right of the Palestinians to have a state; the Palestinians, however, and many other Muslims and Arabs, do not recognize the right of a Jewish state of Israel to exist. Every poll among Palestinians shows that a majority of Palestinians want there to be no Jewish state of Israel — doesn’t believe it should exist — or had any basis for being. And this has been true since 1948, when the British left and the U.N. established a division; Palestine would be cut in half — a Jewish half and an Arab half. The Jews accepted it — the Arabs didn’t accept it. And what happened? The moment it was announced, Arab armies — about seven Arab armies — attacked the Jewish state in order to destroy it. To everybody’s surprise, the little Jewish state survived, and that was pretty much it. And then it happened again in 1967, when the dictator of Egypt, Gamal Abdul Nasser, said “We’re now going to extinguish the Jewish state of Israel.” And Jordan joined him, and Syria joined him — but Israel attacked first, as so Israel survived. And that is how Israel — and only that way — came to occupy what was called the “West Bank” of Jordan — where many Palestinians lived, because many Palestinians lived in that part of Jordan. So, the war was over in ’67 and what did the Arabs do? The Arab states all went to Khartoum, Sudan and announced “No recognition, no peace, and no negotiations,” the three famous “No’s.” What was Israel supposed to do? Then Israel made an agreement to give the entire Sinai Peninsula — an area of land bigger than Israel– with oil — back to Egypt because they said they would make peace with Israel. Israel gives territory back for peace, and it will always do that. But is there really a desire for peace on the part of Israel’s enemies, which broadcast after broadcast on TV and radio, in the Palestinian areas, is about how Jews should be killed and how Allah wants Jews to be killed? That’s the typical broadcast on Palestinian television. And so, its not hard to explain the Middle-East dispute. One side wants the other dead. Do you know what the motto of Hamas is? The motto of Hamas is, “We love death as much as the Jews love life.” Now you tell me how Israel is suppose to make peace when people believe what Hamas believes. Now, here is one of the most important things nobody talks about: Everybody talks about a Palestinian state — Why didn’t anybody talk about a Palestinian state when the Palestinians lived under Jordanian rule? Because, the truth is, people started talking about a Palestinian state once the Palestinians were under Israeli rule, because it was always a way to destroy the Jewish state of Israel. And I say “Jewish State” because that is what it is. There are many, many Arab states but there is only one Jewish state. It is about the size of New Jersey. In fact, El Salvador is larger than Israel. El Salvador! And yet, if a Martian came to the earth and they visited the United Nations, or they read the world’s newspapers, or watched world television, they would believe that biggest problem on Earth is a state the size of New Jersey and El Salvador. This state of Israel, this preoccupation with this little democratic, humane state is absolutely irrational. And here’s another question to be asked: If Israel, tomorrow, put down its arms and said “We will fight no more,” what would happen? If the Arab countries around Israel said “We will fight no more, we will put down our arms” what would happen? In the first case there would be an immediate destruction of the State of Israel with the mass murder of the Jews of Israel. In the second scenario I presented, where the Arabs put down their arms and said, “We just want peace,” there would be peace the next Wednesday. The fact is, as I said at the outset, it is a very simple problem to describe: One side wants the other dead — and if they didn’t there would be peace. Please remember this — there has never been, never in the history of the world, a state in that area, in what is called geographically Palestine, that was not Jewish. Israel is the third Jewish autonomous Jewish state to exist in that area. There was never an autonomous Arab state. There was never an autonomous Muslim state. There was not an autonomous “any-other” state. That’s the issue: Why can’t a little state the size of El Salvador, that calls itself Israel, be allowed to exist? That, in a nutshell, is the Middle-East problem.