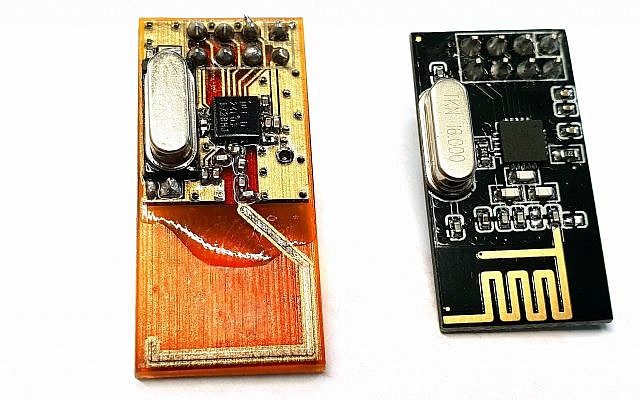 Development will pave way for R&D teams to test their products and bring them to market faster and more efficiently, firm says

Nano Dimension Ltd., a maker of 3D-printed electronic products, said it has 3D-printed a first fully functional communication device to enable smart products to talk with one another and with the cloud. The device was created in under a day, the firm said, making the production process 90 percent faster than the time needed to create a traditional, non-3D-printed Internet of Things (IoT) communication device.

The development will help companies and research institutions create and test their smart products and other prototypes faster and more easily, said Amit Dror, the CEO of Nano Dimension in a phone interview.

Get The Start-Up Israel’s Daily Start-Up by email and never miss our top stories FREE SIGN UP
“Our solution enables companies to speedily trial and finalize their prototypes in just one day without compromising on quality or performance,” Dror said in a statement released by the firm earlier this week. “They no longer have to wait over a fortnight to understand whether their smart device works or not. This ultimately increases product and cost efficiencies and reduces time to market, which means that the consumer can enjoy the benefits of these products faster than ever before.”

The 3D printing of these devices is meant for a relatively small number of devices to see if they work or if changes need to be made. Mass production in the regular way would follow.

Nano Dimension has developed nano-material inks that can be inserted into its 3D printing machine to create electronic parts, such as motherboards, sensors, antennas and other components.

The firm develops the printers and the inks and the software in Israel and has been selling its system worldwide. “We have sold more than 30 systems in 2018 and we are increasing sales,” said Dror. Among its clients are the US Department of Defense agency and other armed forces, which use the printers for advanced tech designs. The printers and their inks are also used by research institutes and automotive and aerospace manufacturers.

The firm posted annual revenue of $5 million and a loss of some $16 million in 2018. Its Nasdaq-traded shares have declined some 47% in the past 12-months, according to data compiled by Bloomberg.